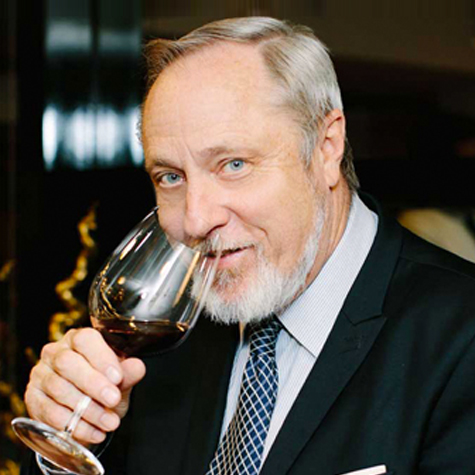 Internationally acclaimed wine educator and best-selling author Kevin Zraly has been described as a naturally gifted speaker who is both refreshingly humble and candid.  His passion for wine and food and his engaging teaching style helps demystify the ever-changing world of wine. He began his career at age 19 as a waiter and bartender in a New York Times four star rated restaurant in the Hudson Valley, New York.

In the years that followed, Kevin journeyed to vineyards in New York, California, and Europe learning his trade and developing his expertise as a sommelier. After graduating college Kevin moved to New York City and a chance meeting with legendary restaurateur Joe Baum led to his hiring as the first cellar master and eventually wine director for the renowned Windows on the World restaurant atop One World Trade Center.  Windows soon became the country’s top grossing restaurant and, with Kevin at the helm of its highly recognized wine list, sold more wine than any restaurant in the world.  It was there that he established his Windows on the World Wine School now in its 38th year graduating more than 20,000 students ranging from wine novices and aficionados to top chefs and culinary professionals.  Kevin worked at the Windows on the World Restaurant for 25 years from the day it opened in 1976 until September 11, 2001.

With his first book, Windows on the World Complete Wine Course published in 1985, Kevin began translating his classes onto the pages of books where his quick wit and capacity to communicate takes the reader through his worldwide journeys from grape to glass.  Each year, Kevin updates the book (now in its 31st edition) with additional wine recommendations and new chapters; it remains the world’s best selling wine book with more than 4 million copies sold. He is the author of the first book that covers wineries and vineyards in all 50 states, Kevin Zraly’s American Wine Guide and The Ultimate Wine Companion,  a compilation of 40 world-renowned wine writers. Kevin’s newest book, his memoirs, A Glass Half Full: A Cellarmaster’s Journey Through Wine and Life will be released in 2016.

He has been featured in such publications as The New York Times, People magazine, The Wall Street Journal, GQ magazine, Newsweek and USA Today and has been featured on the Regis and Kelly Show and other syndicated television and radio shows. He co- hosted the Food Network’s Wine A to Z, captivating his audience with his signature charisma and enthusiasm.

Kevin travels the world spreading his wine knowledge to corporations and their clients through his wine and food dinners and his One Hour Wine Expert classes working with chefs to prepare a truly memorable meal.

Kevin has garnered numerous awards including the James Beard Lifetime Achievement Award in 2011. In 2014, Kevin was awarded the honorary doctorate from the State University of New York. He was also the recipient of the 2006 Wine Literary Award, the 1993 James Beard Outstanding Wine and Spirits Professional Award, the Food and Beverage Association’s Man of the Year Award, the 2009 Wine Professional of the Year from Sante, the Lifetime Achievement Award from the European Wine Council, and the Lifetime Achievement Award from the Society of Wine Educators.  He is a member of the Culinary Institute of America’s Board of Trustees since 1990 and director of the Sherry-Lehmann/Kevin Zraly Master Wine Classes and the Sherry-Lehmann/Kevin Zraly Wine Club in New York City.