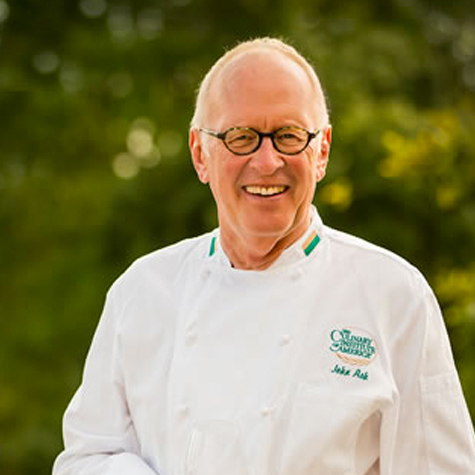 John first came to national prominence when he was selected by Food & Wine magazine as one of America’s “Hot New Chefs.” He founded his restaurant, John Ash & Company, in Northern California’s wine country, in 1980 and it continues to be critically acclaimed more than 28 years later. Nationally renowned as a wine and food educator, John served for many years as the Culinary Director for Fetzer and Bonterra Vineyards. He is on the faculty of the Professional Wine Studies Program at the CIA Greystone. He is also the chair of a new program there for home cooks called The Sophisticated Palate. He travels widely teaching to both home and professional cooks. John has a new winery venture called Sauvignon Republic specializing in sauvignon blanc only, produced around the world. Currently there are four including Russian River Valley appellation in Sonoma County, Marlborough from New Zealand, Stellenbosch in South Africa and the latest, a wine made from certified organic grapes from Potter Valley in Mendocino county to be released summer of 2008. Sancerre in France, Friuli in Italy and Styria in Austria are targeted for future releases.

John has written three books. His latest, John Ash Cooking One-on-One: Private Lessons in Simple Contemporary Food from a Master Teacher, was published spring 2004 by Clarkson Potter. It won a 2005 James Beard award. He has authored two other books: From the Earth to the Table: John Ash’s Wine Country Cuisine and American Game Cooking. The former was awarded the IACP awards for Best American Cookbook and the Julia Child Cookbook of the Year. Chronicle Books released a completely revised and updated version of From the Earth to the Table in 2007. John writes periodically for the Los Angeles Times/Tribune Syndicate and is an occasional contributor to publications such as EatingWell and Fine Cooking magazines. He was featured for two years on the Food Network and has co-hosted a live food and wine radio talk show on KSRO in Northern California for the past 21 years.

John is also a passionate voice on sustainable food issues and has served on the Board of Overseers for the Chef’s Collaborative, a national organization of chefs who support ethical agriculture. He also is on the Board of Advisors of Seafood Watch, an educational initiative for sustainable seafood by the Monterey Bay Aquarium. In April of 2008 John was voted “Cooking School Teacher of the Year” by the International Association of Culinary Professionals at their annual gathering in New Orleans.